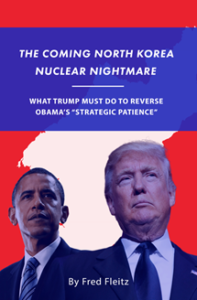 “The Coming North Korea Nuclear Nightmare: What Trump Must Do to Reverse Obama’s Strategic Patience” is an extremely timely analysis of the threat the world faces from North Korea’s nuclear weapons and missile programs by former CIA analyst Fred Fleitz.  Released in March 2018, this book provides an in-depth assessment of the North Korean threat just as U.S. and South Korean officials are preparing to hold historic talks with North Korean officials on their nuclear program.

“The Coming North Korea Nuclear Nightmare” discusses the surge in North Korea’s nuclear and missile arsenals and how this surge was a direct result of the Obama administration’s irresponsible strategic patience policy.  This book also discusses North Korea’s charm offensive at the 2018 Winter Olympics and why President Trump’s Maximum Pressure policy to pressure North Korea appears to be succeeding.
Click HERE to order from Amazon.com.

In his book “Obamabomb: A Dangerous and Growing National Security Fraud,” former CIA analyst Fred Fleitz provides an in-depth analysis of the dangers of the nuclear deal with Iran and how the thr 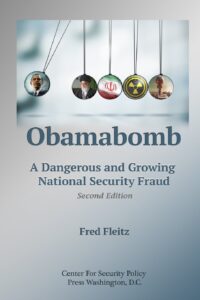 eats it poses to U.S. national security are growing. Fleitz discusses the dishonest campaign by Obama officials to prevent Congress from rejecting the agreement, what is really in the nuclear deal, and how Obama officials are trying to make even more concessions to Iran because Iranian officials claim the deal was not generous enough to Iran.  Second Edition, September 2016.  Center for Security Policy Press.  Click HERE to order from Amazon.com.

At no time since the fall of the Soviet Union has the threat from Russia been as serious – and Washington’s relations with Moscow been as poor – as in the fall of 2016. As charges fly that Russia is trying to influence the outcome of the 2016 presidential election by leaking Democratic e-mails and Hillary Clinton and Donald Trump accuse each other of having inappropriate ties to the Russian government, the questions about where Vladimir Putin is taking his country and what that will mean for ours have largely gone unasked, let alone answered. “Putin’s Reset: The Bear is Back and How America Must Respond” is an effort to address just such questions, drawing upon the expertise of some of the most competent and creative Russian hands and security policy practitioners of our time. 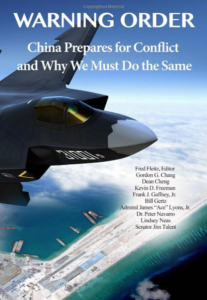 Ever since Richard Nixon opened relations with Communist China, Chinese intentions have been a matter of incessant and often fevered speculation in this country. In particular, national security and regional experts, non-governmental organizations and office-holders alike have endlessly debated whether the People’s Republic of China could be brought into a U.S.-dominated international order and world economy in a manner consistent with American interests. “Warning Order: China Prepares for Conflict and Why We Must Do the Same” addresses these urgent questions. This book explains how, under successive regimes – and most especially that of the incumbent Chinese ruler, Xi Jinping – the Chinese have relentlessly strived to put themselves in a position to challenge, and ultimately to displace, the post-World War II Pax Americana with a new order that would return China to what they considered to be its rightful place as the Middle Kingdom, the preeminent global power strategically and economically. This series of essays by 10 leading U.S. national security experts documents from their various perspectives and fields of expertise a reality that can no longer be safely ignored: China is putting itself in a position to engage in conflict with the United States across a broad front and potentially with decisively devastating results. Our hope is that this book will move our nation past a now-irrelevant debate about Chinese intentions and onto a footing rooted in a focus on capabilities, one that enables us to deter the PRC’s future use of existing, and anticipated, threats to our security and vital interests. 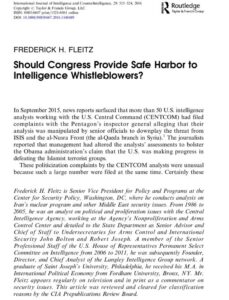 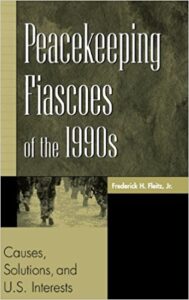 Peacekeeping is a useful tool to manage international conflict and maintain truces, but it will only work in a narrow range of circumstances. Peacekeepers can order punitive airstrikes, depose elected leaders, destroy infrastructure, and enforce peace accords not drafted by the warring parties. They have overstepped their bounds, and peacekeeping is now often a euphemism for any multilateral military action. A CIA analyst who worked closely with Reagan, Bush, and Clinton administration officials on UN issues, Fred Fleitz examines in “Peacekeeping Fiascoes of the 1990s” how peacekeeping works, the rash of peacekeeping failures during the Clinton administration, and whether peacekeeping can still play a role in U.S. foreign policy. It is a unique realist assessment destined to become the guide to this very important subject for U.S. policymakers, politicians, and students of international relations. 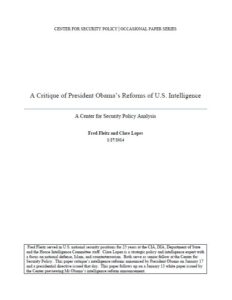 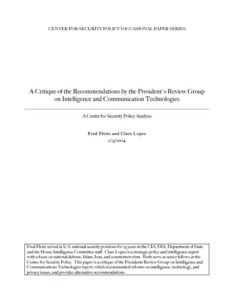 “A Critique of the Recommendations by the President’s Review Group on Intelligence and Communication Technologies.”  An analysis of reform recommendation of U.S. electronic and communications intelligence collection.